A well-liked and kind shopkeeper was viciously murdered on Thursday night in Glasgow, Scotland. Newspapers picked up the story quickly and the police thankfully stopped unwarranted speculation by immediately declaring the culprit to be Muslim.

Asad Shah belonged to the Ahmadiyya Community and the leadership of the community quickly activated their PR machinery and fed the following story to the media, who gobbled it up in their laziness : ‘Asad Shah was a member of the Ahmadiyya, so he was killed by a Muslim who consider Ahmadiyya non-Muslim, and thus the persecution of Ahmadis in Pakistan has now come to the UK.’

I do not claim to know who killed the simple and deluded man, nor do I know the motive. What I know is that his community and its leaders failed him, the mental health system failed him and his family failed him. And now, I cannot let religious businessmen turn his murder into profit for the Ahmadiyya family business that masquerades as a religion or a sect.

Asad Shah claimed to be a ‘prophet’ about two years ago, and around the time he turned 40 (usual age of inception of ‘prophetic’ careers) at the end of January, his rambling ‘revelations’ from ‘God’ increased in volume. In February, he found a writing of a previous Ahmadiyya leader that Glasgow (literally) would be the centre for the re-birth of the Ahmadiyya, and on March 24th (the very day he was killed), he had mused about starting his own organization as he had considerable followers now, all of them disgruntled Ahmadiyya adherents. His claim was a direct challenge to the leader of the Ahmadiyya, Mirza Masroor Ahmad, who is already bedeviled by a rash of ‘prophets’ in his community — in Mauritius, Germany, Canada, United States and Pakistan.

(If a group does not leave its misguidance, Allah will leave it alone and create a new community)

On the same morning (March 24th), Asad Shah was moved by a discussion with a Hariz Mirza, who he thought was part of the ruling Ahmadiyya Mirza family. His fear is palpable: 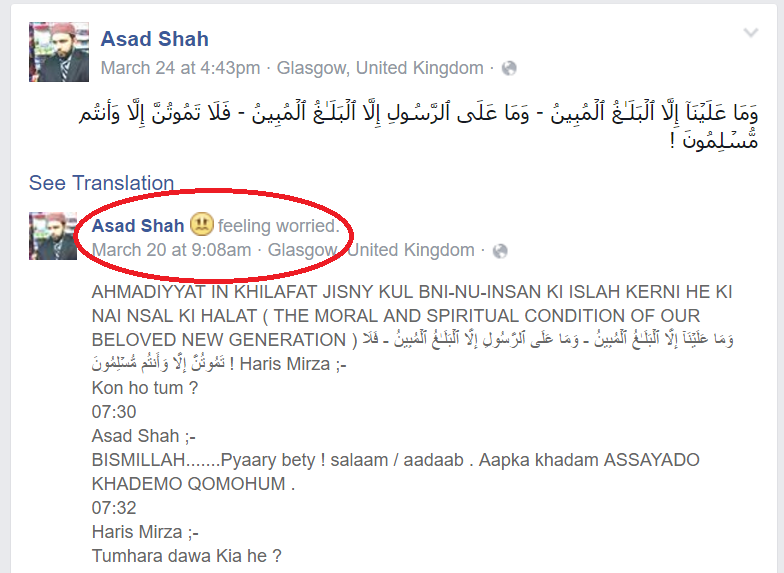 (Asad Shah’s conversation with a ‘Mirza’ on the morning of the day he was killed, which left him feeling worried)

Why Am I Compiling This?

I am an ex-Ahmadi who left the community in 2001 because I thought it was a Scientology-like cult. Since 2010, the Ahmadiyya have tried to create the fear that an Ahmadi would be murdered in the UK.
I am just trying to deny the Ahmadiyya leadership’s attempt to malign the UK Muslim community as Asad Shah was NOT killed because he was an Ahmadi — there are thousands of Ahmadis in UK. Asad Shah had mental issues and he should have been talked to by his community and protected because some of the things he was saying were anathema to Muslims. Nothing justifies the murder but his community and family did fail him.

The last week has seen considerable incitement ‘to do something’ among UK adherents of the Barelvi Muslim doctrine, leading up to the 27th March, which is the 40th day of the hanging of the notorious assassin Mumtaz Qadri in Pakistan.

I also postulate that it is improbable, but not impossible, that the Ahmadiyya leadership passed on a ‘dossier’ on him to some fanatical Muslim, who in this week’s frenzied state, drove 200 miles that same afternoon (news reports) to commit the murder. I am saying this in light of the campaign against me (read below) and Asad Shah’s increasing profile and his desire to form his own community which was expressed that same day. The Ahmadiyya also have a track record, albeit not recent, of violently suppressing dissent :

Previous Attempts by the Ahmadiyya to create fear in UK

After fleeing Pakistan, the UK is the ‘worldwide headquarters’ of the Ahmadiyya so their leadership is particularly sensitive to any Ahmadiyya awareness activity of their detractors. Bluntly speaking, it wants to silence any criticism or dissent in the UK.

In 2010, I worked with the Muslim community in London when a fake ‘murder leaflet’ case designed to malign orthodox Muslim community with a 63-page dossier distributed simultaneously to media outlets. The target was the Tooting Mosque (geographically close to their HQ) and the honourable Sadiq Khan (Labour MP and mayoral candidate). It was pushed with the full PR machinery of the Ahmadiyya and with help from members of parliament, especially Siobhain McDonagh. The Wimbledon Guardian could not keep the story off its front page for days and hounded Sadiq Khan for comment. The case came to naught and the CPS refused to file charges, to the chagrin of the Ahmadiyya and sympathetic luminaries such as Lord Avebury.

In 2011, probably in revenge, the Ahmadiyya sent a dossier on my fictitious ‘deviant beliefs’ to fanatical Muslims in East London who harassed me and my wife until the Met Police cautioned the two perpetrators and I left London for Nottingham. I truly feared for my life. Professor Christoph Bluth of Bradford University has written a report on the incident and that was entered into the record in one of Her Majesty’s Tribunals.

In 2013 and 2014, the Ahmadiyya tried to link their detractors, the Khatm-e-Nubuwwat Academy (who counter the immense Ahmadiyya propaganda targeting UK Muslims) to terrorism by donating to the ICSR (International Centre for the Study of Radicalism, part of Kings’ College). A lengthy report was prepared, for which I was interviewed on the record multiple times, but it was thankfully shelved at the last moment when we made it clear that we would counter the flawed arguments in it.

In 2015, Lord Ahmad of Wimbledon (an Ahmadiyya vice-president) sneaked a letter through his boss, the honourable Eric Pickles, to the imams of the Muslim community which was met with a caustic and brief dismissal by the Muslim community. The Tory government analysed the situation and has since kept Lord Ahmad away from Muslim issues.

Convoluted Theology and Lack of Guidance

The whole Ahmadiyya theology revolves around ‘latter-day saints’ with whom God continues to talk. However, the ‘owning’ family of the Ahmadiyya organisation — the Mirza family — does not accord this Diving privilege to those outside the family.

Combined with the utterly non-democratic nature of the organisation, this results in terrible confusion for sincere members who wish reform in the community. They have no recourse but to claim ‘prophethood’ and publish their ‘revelations’, and they are duly ostracized and shunned by their families and their communities but each one of the five extant prophets has managed to gather a group of like-minded people around them: 2 in Mauritius, and one each in Germany, United States and Canada. Asad Shah was the sixth.

The Ahmadiyya leadership remains silent on the issue of continuing prophets and reformers with the result that this is now the number one burning issue within the community. It makes no attempt to guide or to bring these well-meaning souls within its fold and to clarify the matter.
I have always had the view that this doctrinal negligence is deliberate and is putting these prophets at extreme risk from Muslim fanatics. The disgusting attempt to immediately cash in on Asad Shah’s death has made my view stronger.

I am shocked and horrified at the deplorable murder of Asad Shah, whom we interviewed two years ago when he was seeking publicity. (Video below in Urdu and Punjabi languages).
https://www.youtube.com/watch?v=NRkjgnBaUF8

Asad Shah was probably killed by a Barelvi fanatic already frenzied by this week’s incitement and who discovered Asad Shah on 24th March or who was fed the information on 24th March.

I would request the media and law enforcement to analyse it in the proper context of a troubled man and not to let the Ahmadiyya PR machine turn it into an issue of Muslims trying to kill Ahmadis in UK. 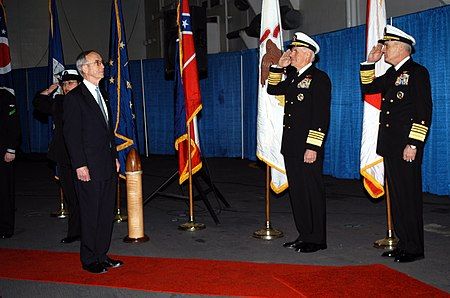 Much has been recently written about the erosion of civilian control of militaries.  A recent paper sheds light on how this phenomenon has developed in the United States over the past decades.  As the US exports military expertise throughout the world, this attitude is increasingly seen in other countries. The
After I raised the issues of Asad Shah’s mental issues and how his family and community should have stepped in much earlier [https://medium.com/@akber/tragic-asad-shah-the-striker-in-millennium-ffea1ccdbe98] , the usual Qadiani Ahmadiyya suspects started commenting on it as ‘baseless’ and ‘rubbish’. Like any other cult followers, they did not venture
There is a picture with text circulating on social media that implies that the vast majority of Muslims are the same as the few terrorists. Without honouring it by reproducing it here, I attempt to re-define the three classes mentioned in it: Jihadists/Islamists/Terrorists : Those who take the theology